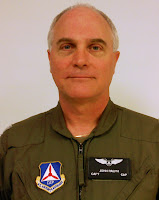 Capt. John Ralph assumed command of the Bowie Composite Squadron in a traditional ceremony in early May. Group III commander, Lt Col. Rob Couch, was on-hand to accept the squadron guidon from outgoing commander Capt. Julie Holley and to present it to incoming commander, Capt Ralph.

Ralph, a member since 2006, has been very active in Civil Air Patrol as an air crew member, cadet orientation pilot and maintenance officer.  He has also been very involved with air crew training of new senior members and with cadets as he introduces them to their first airplane flights. Ralph also serves as an ADIS trainer for Maryland Wing.  Prior to taking command, her served as the squadron's deputy commander for seniors.

Capt. Holley served as squadron commander for about a year and a half.  She stepped down just prior to the birth of her first child.

A number of promotions and awards were presented during the change-of-command ceremony.
They include the following: