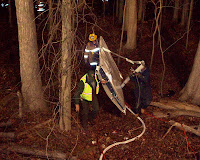 The Bowie Squadron was put on alert over the weekend after a plane crash in Laurel. The pilot took off from Suburban Airport on Saturday afternoon and soon after found that he was having trouble.

He went down in the woods along the Baltimore Washington Parkway. According to a friend of the pilot, this was the maiden voyage for this newly built, two-seat, experimental aircraft. According to Bowie Squadron Commander, Capt Jeff Welch, a driver on the parkway saw the plane fall out of the sky. He called police and then stopped to help the injured pilot who was taken to the hospital for treatment of a broken nose and pain in his neck and back.

The plane was tangled in the trees. Once the removal crew cut off the wings and tail and the plane was uprighted, CAP members were called in to locate and disable the Emergency Locator Transmitter (ELT).
To the right, you will see pictures of the crash scene taken by Cadet Capt Erich Welch. The first picture shows firefighters removing the pieces of the plane. The second shows the removal crew hoisting the remaining part of the plane onto a truck to haul it away.