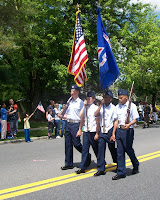 The Bowie Composite Squadron received an award this past Saturday as they paid tribute to fallen heroes in the City of Bowie's annual Memorial Day parade.

The squadron took home second place in the Best Non-profit Float category for the squadron's mini-jet, adorned in red, white in blue to look like a CAP airplane. 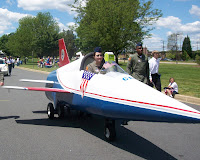 Cadet CMSgt. Sarah Thompson piloted the mini-jet during the parade. It is considered an honor to be chosen for the duty. She was selected "for setting an outstanding example to our junior cadets," according to the squadron commander.

The crowds lining the one-mile parade route were particularly impressed with the fact that a female cadet was at the controls of the small plane. "There were a lot of comments about that, 'Look, it's a girl in that jet!' Sarah inspired many young ladies with 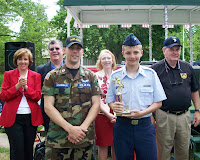 aspirations of being the next female Thunderbird pilots," said Capt. Welch.