Maryland Wing trains in the mountains of West Virginia 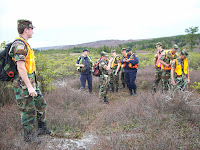 Coordinating with aircraft from the ground during a search and rescue operation can be difficult but highly effective. That is what a ground team learned during the recent joint Maryland/West Virginia Wing Search and Rescue Exercice (SAREX) in Petersburg, WVa.

Three senior members and eight cadets from the Arundel, Annapolis, Bowie and College Park squadrons made up the team, dubbed "Terp Six" by the West Virginia Wing. The team was tasked to find a missing aircraft atop a mountain in the Dolly Sods Wilderness in the Monongahela National Forest.

Unable to contact the aircrew directly, the team relied on the Incident Command Post (ICP) to relay messages about the whereabouts of the aircraft and to coordinate a meeting location. The ICP instructed the team to travel up the mountain in an effort to rendezvous with a Maryland National Guard helicopter. The first trip up the mountain did not prove successful. Neither the aircrew nor the team in the van could see each other. The team was then instructed to head up the other side of the mountain. 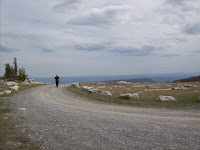 After a long and bumpy ride, Terp Six arrived.

As they waited for the chopper, they gazed at a beautiful skyline separating the cloudy sky from a nearly flat landscape full of gray boulders, grass and bushes. But not everything was going as planned. A storm was moving in and the helicopter was running low on fuel after trying to meet up with the team. The chopper was forced to return to base to refuel before returning to the meeting location.

The eager ground team members, lead by 1st Lt. Willy Santos, jumped into action, quickly grabbing their gear and setting off into the tough terrain to find the wreckage. The foliage was waist high in some spots forcing the team to alternate between looking to the sky and glancing at the ground to avoid falling over rocks and small trees.

"The helicopter was in the air; it circled the target a few times to let us know where it was at. Once we had it in sight, we let the Guard helicopter know," said C/Capt. Mark Cole, a Ground Team Leader Trainee for the event. By following the helicopters movements, the team spotted the simulated wreckage in about 10 minutes. The ground team evaluated the scene. C/Capt. Cole called the findings into ICP. He explained that Terp Six had located a red and white simulated aircraft and that the plane's passengers were not present at the scene.

The team was instructed to collect the pieces of the simulated wreckage and return to base. The training mission was a success according to Capt. Cole. "Once we actually got rolling, things went very smoothly…communication-wise, working with the National Guard helicopter, with mission base. It all worked out fine," he said.