Training to Respond to a Hurricane 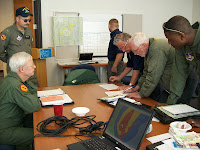 With hurricane season just weeks away, Civil Air Patrol (CAP) members from across Maryland spent this past weekend practicing their ability to respond to a potential hurricane along the Mid-Atlantic coast.

During the scenario held at St. Mary's Airport in California, Md., the teams responded to simulated flooding and property damage due to the simulated landfall of a hurricane on the eastern seaboard. 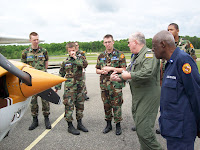 (ELTs). These devices, present in aircraft and some boats, emit a signal when jolted or turned upside down – indicating some type of accident.
Following a real hurricane, planes and boats across the region would be tipped over and damaged meaning many emergency beacons would be activated.

During the training mission, air crews used equipment on board the aircraft to locate the signals and relay that information to search rescue teams on the ground. The crews in the air also practiced their ability to communicate in various locations across the region in order to document places where radio communication is not possible. 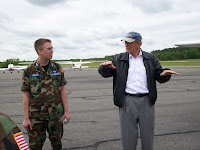 CAP ground search and rescue teams practiced coordinating with the air crews and using equipment on the ground to triangulate the position of the ELTs. They also conducted simulated disaster assessment in low lying areas. 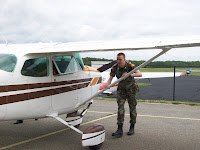 In addition, CAP used the training mission to conduct pre-disaster surveys of flood vulnerable areas in the Chesapeake Bay region. That information will be shared with local and state Emergency Operations Centers and the Red Cross so they too can prepare for a real disaster.