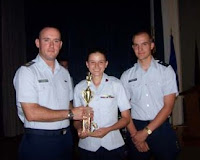 Cadet TSgt. Aimee Welch was recently honored with the Cpl. James W. Higgins, Jr., Honor Cadet Award during the 2008 Tri-Wing Encampment in Reisterstown, Md. Welch competed with more than 160 other teen participants from Maryland, Delaware, Northern Virginia and the District of Columbia to obtain the title of Honor Cadet.

The award is named after former Civil Air Patrol member and fallen U.S. Marine Corps Lance Cpl. James Higgins. The 22-year-old Maryland resident died during combat in Iraq in 2006. The honor is given to the cadet who demonstrates profound teamwork and leadership skills.

Welch attributes her success to her prior experience and support and encouragement from her family.