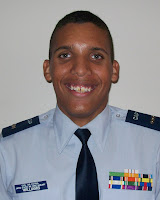 Williams, who joined CAP in late 2004, currently serves as Commander of Alpha Flight in the Bowie Squadron. He calls the Earhart achievement satisfying but he says it took a lot of work. He credits a positive squadron environment and support from his father, 1Lt James Williams, and sister, C/Capt Abigail Williams, for his success. He says watching his sister and fellow squadron member Cadet 1Lt Beau Bustanoby rise through the officer ranks also inspired him to work harder for the Earhart Award.

He encourages younger cadets to set their sights on the Earhart. "I know it looks like a lot of stuff. You have to do your tests, your PT, your other requirements. But, don't worry about it. Just take a little bit of time out each day, maybe 20 minutes, do something. Study for your test. Work out. Do some push-ups or do some sit-ups and eventually you will be there," he said.

Williams has set a few goals for himself and his flight for the remainder of the year. "I would like to see every single member of my flight gain at least one grade in the next six months," he said. He also has a personal goal of achieving the rank of Major in minimal time.
C/Capt John Brennan 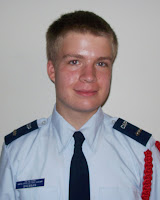 Brennan, a CAP member for about two and a half years, currently serves as Vice-Chairman for the Group III Cadet Advisory Council and as Commander of Bravo Flight in the Bowie Squadron.
He says having people around him to look up to inspired him to work hard through the CAP program and to reach the rank of Captain. "When I first joined CAP, I saw many people who had gotten to this point and they were people I admired very much. So, I am very happy that I have gotten to this point and maybe can help other cadets to get to where I am," he said.

For cadets hoping to earn the Earhart in the future, Brennan says it is important to keep working at it. "Test often and even if you don't pass the first time, keep testing because a lot of cadets are just satisfied staying at Technical Sergeant or at Airman for a while and complacency is bad for being promoted."

In the coming months, Brennan says he hopes to take on more responsibility and to take a load off of the cadet commander. But, he says his primary goal is to continue to help other cadets achieve their goals in CAP.

The Earhart Award
The Earhart Award honors the late Amelia Earhart: an aviator, advocate and pioneer, who set many records for women aviators in aviation's infancy. She was lost while attempting to be the first woman to circumnavigate the globe.

The accomplishment marks the third milestone in CAP's Cadet program. Cadets earn the award after completing the first eleven achievements of the cadet program and receipt of the General Billy Mitchell Award.

In addition, the cadet must pass an arduous 100 question examination testing aerospace topics, leadership theory and staff topics. Since its inception over 30 years ago, just over 14,200 cadets have earned this prestigious award.