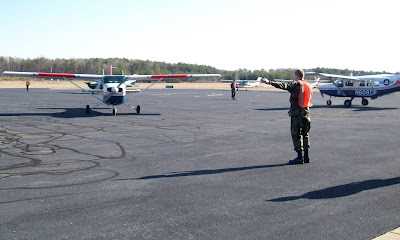 Pilots and aircrews practiced searching for Emergency Locator Transmitters (ELTs) a simulated medical transport mission. On the ground, members tested wing communications equipment. The team successfully conducted long-haul VHF communications using a directional antenna to transmit from St. Mary’s to the Patapsco repeater. This allowed the signal to be carried across the state to the Hagerstown staging area allowing for situational awareness of aircraft across the wing.

In addition, the mission base communications team at St. Mary’s practiced responding to a power outage. To simulate this, the team substituted a van powered radio to communicate with Group III aircraft and to a staging area on the Eastern Shore.

Out in the field, ground teams spent the day practicing their skills, including tracking down ELTs, at various locations across the state. Ten members also participated in flight line training including eight flight line trainees and two flight line supervisor trainees at St. Mary’s Airport.
While training operations were under way, staff members met to a conduct a table-top exercise for future SAREXs at the St. Mary's Airport, including an event planned for April 18th and the Air Force evaluated SAREX scheduled for May 30th. The team outlined several major objectives for the next event while also refining the responsibilities of the planning section, air operations branch and other positions within the Incident Command System.