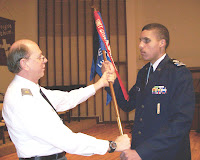 Cadet Maj. Joshua Williams is the new cadet commander of the Bowie Squadron. During a recent ceremony Deputy Commander of Cadets, Maj. Harry Everest, presented Williams with the squadron guidon signifying that he is now in command. A member since 2004, Williams says his goals for the unit include continued membership growth and expansion of the squadron’s ground team program from one team to three.

Cadet commanders are chosen based on a number of factors including participation in CAP activities, knowledge of aerospace principles, self-discipline, teamwork, leadership ability, ethics and physical fitness.

The coming months will be busy for Williams who has been selected by the Air Force, Army and Navy to participate in their respective one-week summer leadership programs for high school students. In addition, the 16-year-old has been chosen to take part in Cadet Officers School, a highly selective training event hosted by the Civil Air Patrol at Maxwell Air Force Base in Alabama. Outside of CAP, Williams is working toward his Eagle Scout rating, the highest rank attainable in the Boy Scouts and he is a member of his local swim team.

Cadet Maj. Williams replaces outgoing cadet commander Cadet Capt. Beau Bustanoby, 16, who served in the position since September of 2008. During his tenure, the squadron saw growth in its cadet membership and the launch of a “Second Hour” activities program which allows cadets to choose a training specialty during the second half of weekly squadron meetings. Cadets can choose model rocketry, ground team or Color Guard training.