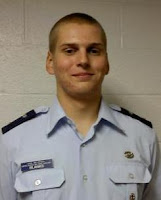 Cadet Joshua Blanks is Bowie Squadron's newest officer.  A member since June of 2008, he was recently promoted to the rank of cadet second lieutenant after receiving the General Billy Mitchell Award.

The decoration is named in honor of the late Brigadier General who was considered an aviation pioneer, advocate and staunch supporter of an independent Air Force for America.

To receive this award, a cadet must complete the second out of five milestones in the cadet program and pass a comprehensive 100-question examination covering leadership theory and aerospace topics.

Cadets who earn the Mitchell award are eligible to enlist at a higher pay grade in several branches of the military, if they should decide to join the service.  They are also eligible for advanced credit in AFROTC, various CAP scholarships, and CAP special activity opportunities.