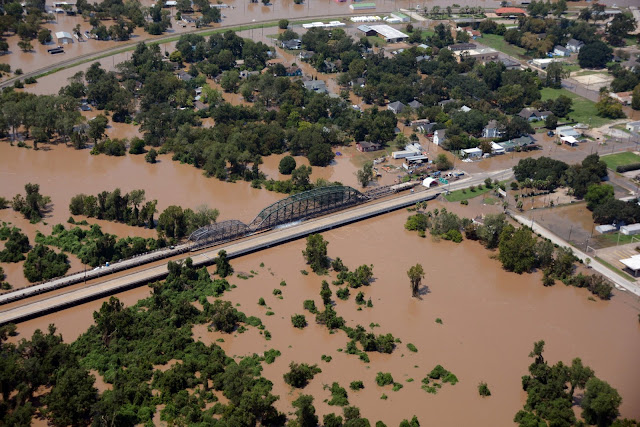 A Civil Air Patrol aircraft taking photos along the rain-swollen Colorado River near Wharton, Texas, received a radio call for help and observed a group of people gathered at Holy Families Catholic Church. Three hundred people sought shelter from the floodwaters that had cut off access to the town of 8,800 people, located about 60 miles southwest of Houston, and they were running low on food and water.

A second CAP airplane was dispatched to get more detailed information about the location, including a phone number, to pass along to the Texas Emergency Operations Center. As a result, the Red Cross team at the EOC was able to contact its volunteer at the church and arrange to provide needed support.

The Hurricane Harvey relief effort on Friday was all in a day’s work for Civil Air Patrol volunteers working from their incident command post in San Antonio, site of CAP’s 2017 National Conference. On Friday, aircrews flew an additional 29 hours and took almost 21,000 photos, bringing the totals to 61 hours flown and more than 29,000 photos to day.

There are now 333 CAP volunteers from 34 states who have contributed to this mission.
One of those volunteers is Louisiana Rep. Ralph Abraham. He joined the group on Thursday, piloting aerial photography flights over flooded areas of Louisiana and Texas. Abraham, a CAP lieutenant colonel, said he planned to fly through the weekend. Abraham told USA Today, “From the air you can see that the water is so massive it will take weeks to make sure no one’s in harm’s way.”

At the San Marcos, Texas, Regional Airport, 19-year-old Cadet Lt. Col. Chuck Baker has been managing aircrews and flights since air operations began on Wednesday. Serving as an air operations branch director, Baker is handling the logistics to support 30 CAP airplanes from around the country, as well as assigning crews and aircraft to missions, briefing them, and tracking their flight progress.

With the conclusion of the CAP National Conference on Saturday night, the incident command post is shifting to San Marcos Regional Airport today and 15 of the airplanes will be relocated to Ellington Field Joint Reserve Base near Houston. Ellington Field, a defense and homeland security compound, operates as a joint reserve base with all five of the U.S. Armed Forces represented onsite.

“I am extremely proud of all of our aircrews, they did exactly what they were trained to do — fly the photo assignment, but let us know if they find persons in distress and get other assets out to pursue the situation when they see someone in a bad situation,” said Lt. Col. Rick Woolfolk, CAP’s  incident commander in Texas.

Photos taken by CAP aircrews over the past four days are available for public viewing on this website for the University of Texas Center for Space Research Modeling, Observation and Visualization for Emergency Support, or MOVES.